The high quality nutrition of Barley+

The gastrointestinal system processes or digests Barley+ and liberates the nutrients intrinsically present, allowing nutrient uptake from the small intestine and nutrient distribution by the circulatory system. The high quality fibres in Barley+ that have escaped digestion in the small intestine, progress to the large intestine where they exert various important health benefits.

Barley+ digestion in the mouth

Barley+ digestion commences in mouth with mastication, which increases the surface area of Barley+. Here, under the enzymatic activity of salivary amylase, carbohydrate digestion begins.

Barley+ digestion in the stomach

As Barley+ remnants move into the acidic environment of the stomach, pepsin and hydrochloric acid further the enzymatic digestion by breaking down the proteins into smaller polypeptides. Lingual lipase commences the enzymatic digestion of the healthy fats present in Barley+. The smaller fragments, together with the carbohydrates, intrinsic vitamins, minerals, antioxidants and other nutrients present, then move into the small intestine for further digestion and then absorption.

Barley+ digestion and absorption in the small intestine

Pancreatic amylase and other carbohydrate-digesting enzymes continue the breakdown of digestible carbohydrates, with the liberation of smaller carbohydrate units and then simple sugars. These simple sugars are further hydrolysed by brush border enzymes into their constituent monosaccharide units, which essentially make these ready for absorption.

As Barley+ may be consumed with cow’s milk, it’s notable that in some people, the cow’s milk-derived disaccharide (lactose) may escape complete digestion in the small intestine, with at least some lactose continuing its journey along the gastrointestinal tract to the large intestine. Here, it will undergo fermentation by resident gut bacteria, which may lead to gastrointestinal symptoms in some people: this is commonly referred to as lactose intolerance. In such cases, replacing cow’s milk with a lactose free plant milk substitute, such as Australia’s Own Organic Soy Milk or Australia’s Own Organic Almond Milk may be a good option.

Dietary fibre is a heterogeneous group of compounds comprising predominately carbohydrates and includes polysaccharides, oligosaccharides and lignin (a non-carbohydrate fibre). Although small differences exist around the world in dietary fibre definitions, in Australia fibre is grouped into 3 main fibre type families: 1) resistant starch; 2) soluble fibre; and 3) insoluble fibre. Dietary fibre means that fraction of the edible part of plants or their extracts, or synthetic analogues that: (a) is resistant to digestion and absorption in the small intestine, usually with complete or partial fermentation in the large intestine (Figure 1); and (b) promotes one or more of the following beneficial physiological effects: (i) laxation; (ii) reduction in blood cholesterol; (iii) modulation of blood glucose (2). 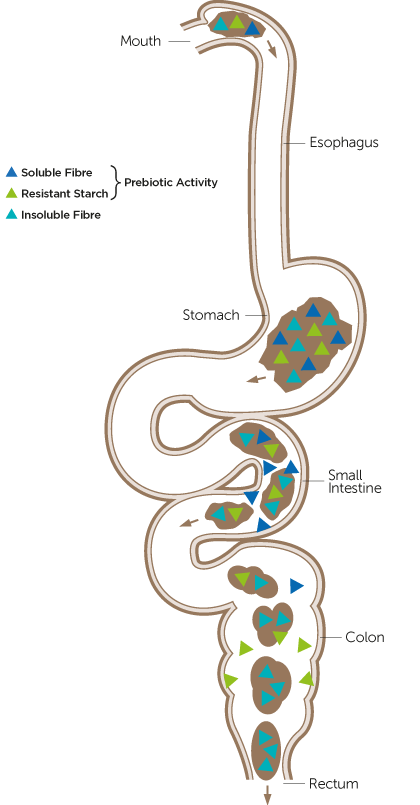 Figure 1: The transit of resistant starch, soluble fibre and insoluble fibre through the gastrointestinal tract.

The barley in Barley+ contains a unique mix of 3 high quality fibres that work together to impart their digestive health benefits. We call fibres working together in this way the ‘The Perfect Fibre Mix’.