The Barley+ Muesli and Muesli Bar product range contains the whole grain BARLEYmax™ as its key ingredient. BARLEYmax™ is a new, non-genetically engineered, hull-less whole grain barley tcultivar, developed by Australia’s prestigious research institution, the CSIRO. Due to its exceptional nutrition density and potential to positively influence human health, the CSIRO has a long-held interest in barley. BARLEYmax™ emerged from research stemming back to the 1990s, when amongst a collection of new non-genetically engineered barley grains, BARLEYmax™ was identified as a superior cultivar, due to its high levels of dietary fiber including resistant starch-like fiber (for its prebiotic activity), soluble fiber (incl. beta-glucan in high amounts) and insoluble fiber (cellulose, lignin) compared with other conventionally consumed whole grains (Figure 1)(1-3).

Americans do not meet recommended
intakes of fiber and whole grains

Dietary fiber is found at high levels in whole fruit, vegetables and whole grains. While some Americans have increased their dietary fiber intakes in recent years, most Americans continue to consume far too little and increased consumption is recommended(8-10). Whole grains are an excellent source of fiber.

One 63 g serving of Barley+ Muesli adds around 2 ounce-equivalent of whole grains to a daily intake and so Barley+ can help Americans meet their recommended intakes of whole grains. 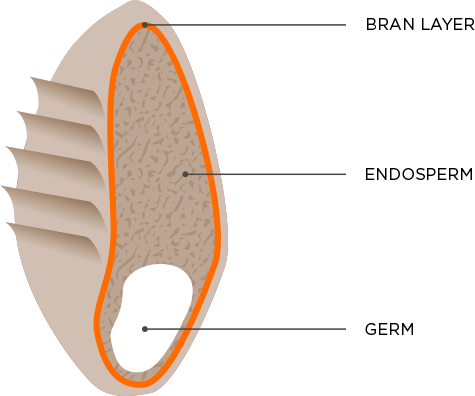 Adequate consumption of whole grains is a well-accepted dietary pattern associated with reduced risk of chronic disease(4-5). The benefits come from whole grain foods but not refined grains(6), which emphasizes the importance of consuming whole grains like BARLEYmax™.

Dietary prebiotics are defined as “selectively fermented ingredients that result in specific changes in the composition and/or activity of the gastrointestinal microbiota, thus conferring benefit(s) upon host health” (11, 12). Examples of foods rich in dietary prebiotic fiber include Barley+, legumes and lentils, Jerusalem artichokes, onions, garlic, leek and asparagus(13). Dietary prebiotics essentially provide substrate for the gut microbiota and subsequently can change the composition and activity of resident gut microbiota(13, 14).

In contrast, probiotics are defined as “live microorganisms which when administered in adequate amounts, confer a health benefit on the host”(15).

Probiotics are essentially living microorganisms already present in fermented foods such as yogurt, kefir, miso, sauerkraut or kimchi, or as ingredients added to functional foods and dietary supplements. However, many probiotic commercial products contain bacteria species (bifidobacteria and lactobacilli), which are dominant species in milk-fed infants, but are relatively minor species in adults(14, 16). It has been suggested that for effective use of probiotics, particular strains or species should target specific conditions(14).

The favorable influence of good dietary prebiotic intake on gut microbiota may be a better route to a healthier gut profile in some people. This may be especially relevant when specific probiotics are used in individual condition management.

The gastrointestinal tract is inhabited by vast and diverse populations of microorganisms, with the largest and most important found in the colon(12, 17). Over one trillion bacteria contribute to the make up of the human gut microbiota, and play a fundamental role in the wellbeing of the host(17-19). The constituents of the microbiota have been shown to interact with one another and with the host immune system in ways that influence the development of disease(17, 20-22). For instance, changes in the intestinal microbiota can disrupt normal intestinal function(20), irritable bowel disease pathogenesis is linked to the gastrointestinal microbiota(17, 23) and some(24, 25) but not all(26) studies show that obesity is associated with an imbalance in normal gut microbiota. The importance of the link between dietary intake, colonic microorganism metabolism and human health is becoming increasingly well recognized(14, 21, 27) and may at least partly explain the relationship between the protective effects of specific dietary fiber types and serious chronic diseases, including colorectal cancer(18, 28, 29).

In humans, one of the major functions of the large bowel microbiota is to produce short chain fatty acids (SCFA), which supply energy to the intestinal cells of the host. Intake of fermentable prebiotic fiber can alter microbiota profiles and increase specific bacteria numbers in the large bowel by providing substrate to gut bacteria or by increasing SCFA supply(31-33). Insufficient SCFA supply limits substrate availability and may influence poor gut outcomes(34). Resistant starch specifically has been shown in human and animal models to modify gut microbiota(35-39), and to promote beneficial effects on large bowel function in healthy adults(39). As expected, the type and magnitude of response to resistant starch is highly variable between individuals, is reversible and is tightly associated with resistant starch intake(39). Recently, resistant starch has also been shown to improve insulin sensitivity independently of the gut microbiota in rodents, highlighting that resistant starch may also exert health effects via other metabolic pathways, such as alterations in the bile acid cycle(40). Other well documented prebiotic effects in humans stem from fructans and fructooligosacharides(41-43), which make up ~10% of BARLEYmax™ whole grains.

The bacterial composition of the gut microbiota varies considerably between healthy individuals, depending on their diet and other environmental factors(17). However, it has been shown that bacteria of the bacteroidetes and firmicutes phyla typically dominate the gut bacteria communities (17, 30). Further, it is suggested that the microbiota profile of most adults can be classified into one of three ‘types’ or enterotypes, based on their particular dominant genera and their ratios to one another (17, 26). Enterotype 1 is dominated by the bacteroides genera; enterotype 2 is dominated by the prevotella genera; and enterotype 3 is dominated by the ruminococcus genera (17, 26). Interestingly, these broad gut microbiota enterotype patterns are largely determined by diet (17, 27).

BARLEYmax™ and so Barley+ is a rich source of various prebiotic dietary nutrients, including resistant starch, fructans and fructooligosacharides. It is the bacteria-generated SCFA metabolic end products of dietary nutrient fermentation that contribute significantly to human health(32, 44). Butyrate, propionate and acetate are the bacteria-generated SCFAs of principal importance to colonic health(14, 29, 44) (Figure: 3).

Butyrate is the preferred substrate for the cells in the colon and importantly, butyrate appears to promote a normal phenotype in these colon cells(32).

Figure 3: Fermentation of dietary prebiotic resistant starch and fructooligosacharides and butyrate production in the large bowel. Lower pH values (and raised SCFA) are believed to prevent the overgrowth of pH-sensitive pathogenic bacteria(32). Figure adapted from reference(32).

Resistant starch is the major substrate for colonic butyrate production(29, 39). Fermentation of BARLEYmax™ resistant starch and prebiotic fiber has been shown to favor the production of the butyrate SCFA in the colon(45, 46). It has been suggested that butyrate has the strongest protective effect against colorectal cancer(29). To this end, some experts suggest that the higher colorectal cancer rates observed in developed nations relative to lower risk populations may be attributable to insufficient consumption of resistant starch and other more fermentable fiber types, while populations at lower risk consume higher levels of resistant starch via whole grain intakes and cooking practices (28, 44).